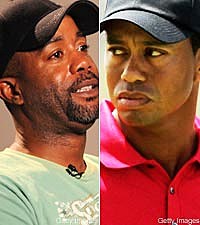 Darius Rucker is quite the golf enthusiast, thanks in part to the influence of close friend Tiger Woods. But in spite of their friendship that spans almost two decades, the singer says even he has lost touch with the golfer since explosive news broke of Tiger's infidelity.

With Tiger's name splashed all over the headlines, Darius says he will stand by his friend. "I feel for everybody involved," the singer tells Chicago-based radio station US99. "I know how much he really does love his family, and I just feel for everybody."

Darius, who sang at both Tiger's wedding and at his father's funeral, says he was completely unaware of the secret life the golf great was leading. "I found out like everybody else," he admits. "You don't have to look up anything at all ... even if you don't want to see it, it's gonna be right there."

On a happier note, Darius tells US-99 that he and his family are on cloud-9, still elated over his CMA Award for Best New Artist. "That was an awesome moment for me," he says. "It might be goofy to some people, but it was one of the greatest moments of my life."

Darius, whose first three singles all reached No. 1, is already in the top ten with his fourth single, 'History in the Making.' His sophomore country album will be released later this year and includes a duet with his old touring buddy, Brad Paisley.