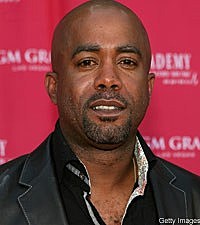 Hootie has flown the coop -- at least for now -- according to Hootie & the Blowfish lead singer Darius Rucker.

"Hootie played our last show last night for years," said Rucker Wednesday during an AOL Music Sessions taping. "We have four charity gigs that we do every year and will still do every year. But we will not do a record or tour for five or six years ... until I do three or four country records."

As he starts over as a country artist, Rucker says it's the nascent days with his Blowfish band mates that he misses when he looks back at the group's tremendous success. "I miss when the four of us were riding in the van and we were the four best friends in the world," he says. "We were inseparable ... We grew up and grew apart and got married and had kids. Even when we play now, we're not as close as we were. I don't miss the getting big or all that stuff, I miss when we were real close ...The struggle was the fun part."

And if fans still want to call Rucker "Hootie," that's fine by him. "After being in the limelight for 15 years, you're just glad that people still know who you are ... especially since I've lost weight and I'm not a fat hippie anymore. [laughs] So if people still know who I am, that's a good thing!"

Come back to The Boot on September 16 to watch Rucker's AOL Music Sessions performance.