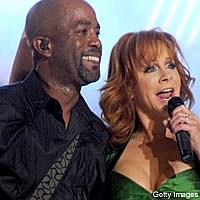 This year's 'A Capitol Fourth' will have more than just a grand fireworks display. The show, marking its 30th anniversary, will also feature performances by a pair of country artists, whose careers have lit up the airwaves for a couple of decades.

Reba McEntire and Darius Rucker have been tapped for the television special, which will be broadcast live from the West Lawn of the U.S. Capitol on the 234th birthday of the nation. The show will be hosted by actor Jimmy Smits and will also feature a performance by classical pianist Lang Lang with the National Symphony Orchestra.

As part of the show, Reba will be presented with the National Artistic Achievement Award in recognition of her dedication to the performing arts and her high-profile musical career. This illustrious award has only been presented three other times. The first recipient was composer John Williams in 2003, followed by Gloria Estefan and husband Emilio in 2005 and the legendary Stevie Wonder in 2006.

'A Capitol Fourth' will be broadcast on Sunday, July 4 beginning at 8:00 PM ET on PBS before a live audience of hundreds of thousands and many more at home. The show will also be heard on the American Forces Network and NPR.