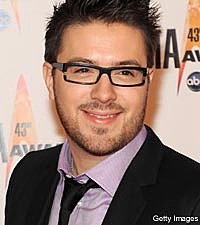 Danny Gokey is the latest 'American Idol' contestant to find a home in country music. But, he admits he might have chosen an entirely different genre if it wasn't for advice from one of his heroes.

"When I was on 'American Idol,' Randy Travis was one of the mentors," Danny explains to CMT. "I was walking past his bus, and he happened to be out there ... He said, 'Well, you need to do country music. They would love you. The fans would take you in.' And it's almost like from that point, the wheels started turning, and it just started making sense."

Placing third on 'Idol,' Danny joins the ranks of several country artists who got their start on the show, including Bucky Covington, Kellie Pickler, Josh Gracin, Phil Stacey and the most successful 'American Idol' winner so far -- superstar Carrie Underwood.

"She is a very good friend," Danny says of Carrie. "She reached out, giving me advice when I needed advice. And she's just an awesome stand-up girl. I haven't been able to get in contact with anyone else. I mean, I don't try to knock down people's doors, but when the time comes and when the time is right, I'll do it."

Danny became a fan favorite on 'Idol' on the strength of his powerful pipes, but he also garnered a lot of admiration from fans after revealing that his wife, Sophia, unexpectedly passed away just one month before he auditioned for the show. But all his hardships are what make Danny's first single, 'My Best Days Are Ahead of Me,' a perfect fit for where he is in life.

"It's a great reflection of where I'm at in my life," he asserts. "Many people knew me as the guy on 'American Idol' who went through the tragic loss of his wife, and it was a very real story. But coming out as my first single, I want to tell people, yes, that was a section of my life that could have had a terrible, terrible ending ... with the amount of depression that wanted to hit me. But I kept my focuses right. I tried out for 'American Idol,' I got a record deal, and now it's like my best days are ahead of me. Something positive has come out of this, out of a terrible mess that happened."

'My Best Days Are Ahead of Me,' is the first single from Danny's debut album, 'My Best Days,' which was released earlier this month.