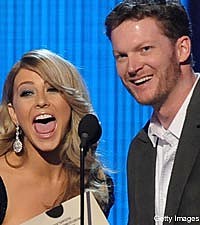 NASCAR driver Dale Earnhardt Jr. has had a rough racing season this year. But in the middle of trying to regain his momentum as a race car driver, he made a pit stop in Nashville for the CMA Awards last week, where -- after much angst and anticipation -- he took the stage to present the Vocal Duo of the Year award with Julianne Hough and rubbed shoulders with some country greats on the red carpet and backstage.

Dale Jr. tells USA Today that because the experience was "way outside" his comfort zone, he "dreaded every moment up until it started happening. From the moment I said I'd do it, which was about a month and a half before, to the moment when I got there, I was thinking, 'What did I do this for?' I sat down, and the first performance went off. I was sitting there thinking, 'Man, I'm going to see a concert with some of the greatest of today's stars. This is pretty cool.' The more it got going, the more I got into it. I knew that would happen. It's just angst and nervousness leading up to it."

The popular driver says he attended the rehearsals but noted that 65 percent of those who were presenting awards didn't bother to show up to rehearse. While he enjoyed the experience of being able to present an award, he says the real fun was meeting the stars. "I'm as starstruck as everybody else, so walking the red carpet, you see a lot of different people. You see Reba McEntire, whom my sister is a huge fan of, and I wanted to get my picture with Reba for my sister, but I didn't have the nerve to ask her."

He did get to spend some time around another music legend, however. "I was in the green room with Kris Kristofferson for probably two hours, and Mike Davis [PR director for NASCAR team JR Motorsports] got to talk with him ... about North Carolina. I was just happy for Mike to have a conversation with a guy like that, and me being able to meet him and tell him how much a fan I was. Stuff like that was really cool. He was a Highwayman."