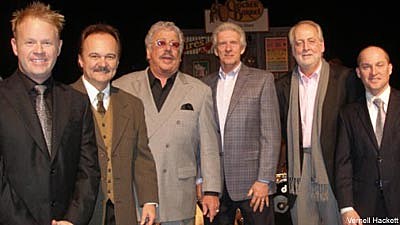 The new album, available at Cracker Barrel Old Country Stores, is the duo's special way to pay homage to their boyhood musical heroes. Both Jamie Dailey and Darren Vincent were Statler Brothers fans from the moment they heard the special harmonies and heart-warming songs the four men from Virginia created for their fans.

When Darrin was six years old, he and his sister, bluegrass queen Rhonda Vincent, were playing a state fair with their family band. "We played five of six shows a day and when we weren't playing they were playing the Statler Brothers. The first time I saw them, Rhonda and I were opening for them. I can tell you they came out and entertained folks. I was excited to meet them so after the show I went backstage and looked around and they were already headed down the road on their bus!"

"We were looking for a Cracker Barrel," Harold Reid, bass singer for the Statlers, quips. On a more serious note, though, Harold adds, "Dailey & VIncent are not only great guys to listen to, but go out and see their show. It's well worth your time because they entertain from the moment they set foot on the stage."

The duo performed songs from their album for an invited audience at the Hall of Fame's Ford Theater. Sitting on the front row were the Statler Brothers. Also in the audience were recent Grammy winner Steve Wariner, Joe Bonsall and Duane Allen of the Oak Ridge Boys, Ricky Skaggs, and gospel singer/songwriter Bill Gaither. Also in attendance: Wilson-Fairchild, a duo comprised of cousins Will Reid and Langdon Reid, the sons of brothers Harold and Don Reid of The Statler Brothers.

After performing 'You Are My Sunshine' and 'Flowers on the Wall,' Darrin said, "You think we're not nervous, with our heroes here on the front row?" Jamie told the audience how he first became aware of the Statlers. "Back in the '80s, my dad gave me a cassette of the Statler Brothers.The first song I heard was this next one, written by Jimmy Fortune, and I haven't been right since! I heard it and told my dad 'I want to do that when I grow up.' And here we are."

Dailey & Vincent have added a special Statler Brothers segment to their live shows. The CD is available at Cracker Barrel Old Country Stores and at the Cracker Barrel website now.