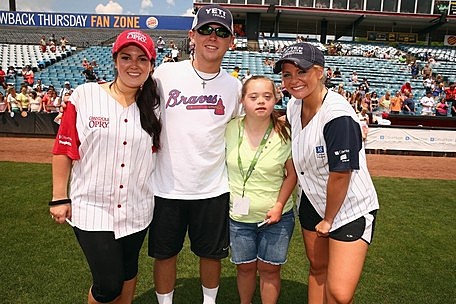 Some of Music City's most up-and-coming stars gathered at Nashville's Greer Stadium on Saturday morning (June 8) to take part in a charity softball game that raises money to fight cancer.

Scotty McCreery, Florida Georgia Line, Craig Campbell and Lauren Alaina were among the luminaries who turned out for the 23rd Annual City of Hope Celebrity Softball Challenge.

This year's game pitted the Grand Ole Opry team against the players from 'After MidNite With Blair Garner.' The Opry team pulled out a 29-27 victory even after a disastrous fourth inning in which Olympic skater and team pitcher Scott Hamilton gave up 14 runs. Manager Pete Fisher didn't pull Hamilton out of the game, letting him finish out for the win.

McCreery is a veteran from past years. "We're having fun playing softball, but we're here for a good cause," he told the Tennessean. "We've seen the patients come out here, and we've seem them come back cancer-free. It makes it all worthwhile."

Recent 'American Idol' runner-up Kree Harrison was also on hand, along with 'Nashville' star Jonathan Jackson, who was a strong catcher and calming presence for the Opry team.

Not everyone was as strong. Playing softball for the first time, Campbell admitted he didn't know what he was doing. "I'm just trying not to get hit by the ball," he said. And while Maggie Rose was voted the game's MVP via a Twitter competition, she actually didn't do much to help her team win. "I'm very honored, humbled and confused," she said.

All monies raised will go to City Of Hope. For more information about their research and treatment facilities, visit this link.