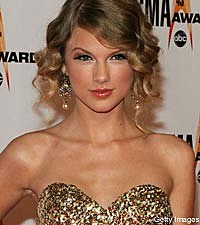 Taylor Swift was the belle of the ball at the 43rd Annual CMA Awards, leading the pack of winners with four trophies: Female Vocalist, Album of the Year, Video of the Year and the night's biggest honor, Entertainer of the Year.

"I will never forget this moment, because in this moment everything that I have ever wanted has just happened to me," a teary Taylor said upon receiving the coveted Entertainer trophy, becoming the youngest artist in history to win the award.

Brad Paisley and Lady Antebellum each had two CMA wins. It was Brad's third consecutive win for Male Vocalist, and he also shares an award with buddy Keith Urban, as they took home Musical Event of the Year for their duet, 'Start a Band.' Lady A beat Rascal Flatts' streak of six consecutive Vocal Group of the Year wins with their latest honor, which accompanied their win for Single of the Year for 'I Run to You.' (See a full list of winners and nominees below.)

Show hosts Brad Paisley and Carrie Underwood kept the audience entertained with witty banter throughout the night, starting the show off by singing a humorously revised version of a Willie Nelson classic: "Mammas, don't let your babies grow up to be Kanye." Fans were also dazzled by eclectic performances by the likes of Reba, Best New Artist winner Darius Rucker, Miranda Lambert, the Zac Brown Band, Lady A, Keith Urban, Tim McGraw, Duo of the Year winners Sugarland, Jason Aldean, Billy Currington and both show hosts. And in true CMA fashion, it wasn't all country stars on stage. Kid Rock sang with Jamey Johnson on 'Between Jennings and Jones,' Vince Gill joined Daughtry on a duet that appears on the rockers' new album, Brooks and Dunn performed with ZZ Top's Billy Gibbons and Dave Matthews joined Kenny Chesney on their duet, 'I'm Alive.'

New Artist Of The Year

Vocal Group of the Year

Vocal Duo of the Year

Album of the Year (Award goes to artist and producer)

'Love on the Inside' - Sugarland, produced by Byron Gallimore, Jennifer Nettles & Kristian Bush

Single of the Year (Award goes to artist and producer)

*'I Run to You' - Lady Antebellum, produced by Victoria Shaw & Paul Worley

'In Color' - Jamey Johnson, produced by the Kent Hardly Playboys

Song of the Year (Award goes to songwriters)

'I Told You So' - Randy Travis

'Down The Road' - Kenny Chesney with Mac McAnally

'Everything But Quits' - Lee Ann Womack with George Strait

'I Told You So' - Carrie Underwood with Randy Travis

Music Video of the Year (Award goes to artist and director)

'People Are Crazy' - Billy Currington, directed by The Brads

Musician of the Year