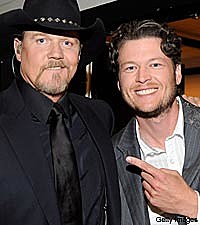 Blake Shelton and Trace Adkins have won the CMA Award for Musical Event of the Year. The buddies were recognized for their chart-topping hit, 'Hillbilly Bone,' the title track from Blake's six-pak disc, released in March.

"Thank you, fans! Yeah!" Blake said upon receiving his award (quote via CMT). "That's how I like to start the night right there. I can relax and get drunk now!"

And in true Blake fashion, the speech continued on a humorous note, as he stood on stage without his duet partner. "If Trace were here -- and he's not -- I'm sure he would have said something like, 'You better be glad we won this, or I would have whipped somebody's ass,'" Blake joked.

The pair, who are longtime friends, had a memorable -- and physical -- time shooting the video for 'Hillbilly Bone.' "I've known Trace for a long time," Blake tells The Boot. "And here's one thing I know about him: I know exactly what buttons to push with him to really get him mad at me ... And I started getting drunk -- they were bringing these bottles of wine out and said, 'Drink right out of the bottle and be out of place,' and it was real wine. So I started getting flirty with Trace, because he's got the long, sexy hair. He started getting mad at me as I started to hug on him and kiss on his cheek in front of all these good-looking girls."

Turns out, Trace's reaction worked perfectly for the video's footage. "He [said], 'I swear, you touch me one more time and I really will rip your head off,'' Blake continued. "He was getting mad! If you watch the video, and know that, you can tell by the end. You can tell it was like, 'Alright, Trace, well I guess we'll see you la ... ,' and he was gone. But it's always been that way with he and I."

This is the first CMA award for both Blake and Trace. It's Trace's eighth nomination and Blake's sixth.