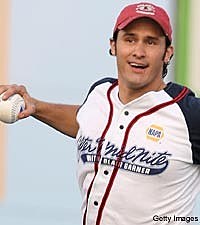 The annual, star-studded softball game splits celebrities between the Grand Ole Opry team and After Midnight with Blair Garner (syndicated radio show) team. Tickets from the game and its corresponding auction raise money for the City of Hope, a research and treatment center for cancer and other life-threatening diseases. Since it began, the event has raised more than $2 million for the cause.

"It was a great game," Josh Thompson told The Boot in the dugout after the game. "I haven't played softball in a lot of years. I didn't strike out tonight, but Jason Aldean did get me out once. That's okay because Aldean's been good to me in the past. As long as he walks away from this feeling good about that, that's okay because we were victorious in the end!"

Monday night's game was the first City of Hope experience for Jaron of Jaron and The Long Road to Love, which left him feeling a little sore, but happy nonetheless. "It was a lot of fun," he told The Boot, even though his team was defeated in the end. "I think it was a great for the fans and the artists alike. This week is about the fans, fans, fans! I love this genre so much. They love their fans, and the fans love them. I love my fans, and they love me. I cannot wait to meet so many of the people who I talk to every single day on Facebook."