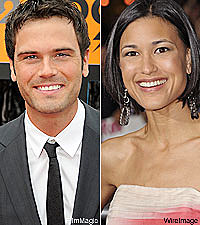 Chuck Wicks shot the music video this week for his new single, 'Hold That Thought,' a sultry love song he co-wrote for his upcoming album. His love interest is played by actress Julia Jones, who will appear as Leah Clearwater in the third installment of the 'Twilight' film series, 'Eclipse.' She was also featured in the final season of 'ER,' as well as in Tim McGraw's first feature film, 'Black Cloud.'

The two never met until last week and didn't even know each other existed until a mutual friend put them together. "I talked to my publicist out in L.A and said, 'I need somebody that's just a great actress, that's exotic and sexy," Chuck tells The Boot. "And she [said], 'I've got the perfect person ... Julia Jones.' And so, you know me, I googled her! And I said, 'She's perfect.' And she said, 'Yeah, I'll do it.' [Julia] heard the song and loved it. That's what was mind-blowing to me is that she said she loved the song and that was cool."

Julia didn't know anything about Chuck before getting cast in the music video, so, naturally she took similar action to the singer. "I got this phone call and the first thing I thought of was, 'Well, let me hear the song,'" the actress tells The Boot. "So I did two things -- I listened to the song and then I googled Chuck. And I said, [giggling] 'OK!'"

The song features such provocative lyrics as "Close your eyes and picture this, we're lyin' in bed in the candlelight and we start to kiss ...now picture us that moment before we make love, now hold that thought." It tells the story of a guy who's coming home from a trip and talking to his girlfriend or wife on the phone about all the things he wants to do when he gets home and is in her arms once again. That being said, some of the scenes are pretty sexy, too. So just how does Chuck prepare for that kind of welcome home? "I've brought a bottle of Scope with me," jokes the Delaware native. "You can't eat and then have to make out. I'm prepared. I'm ready."

After filming wrapped, Chuck took to his Twitter account and tweeted: "Stunning!!!! Can't wait for you all to see this!! Very ... Very ... Sensual stuff!!"

Kristin Barlowe ('Backwoods,' 'Stealing Cinderella' and 'Would You Go With Me') directed the clip.