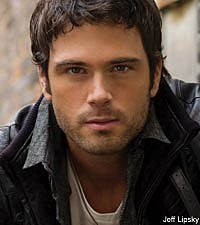 Chuck Wicks may have been brokenhearted over his split from ex-girlfriend, Julianne Hough, but the bachelor says life today couldn't be better! With talk of possible relationships between his former flame and a few high-profile celebrities, including Ryan Seacrest, Chuck offers a piece of advice to the 'American Idol' host.

"She's 21," he tells Tampa Bay-based radio station WQYK. "You're 40. You've got your hands full." Acknowledging that Julianne is free to date whomever she chooses, Chuck adds that he doubts a budding romance between Ryan and his ex exists. "It's probably a rumor. Wasn't she with [comedian] Dane Cook like a month ago?"

Though he's wishing Julianne well, Chuck can't help but poke fun at the older men the dancer/singer has been linked with. "Ryan can actually be her dad, so that's cool. And Dane could almost be her dad, so she's getting better!" 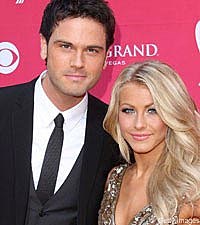 All kidding aside, Chuck says he holds no animosity toward Julianne. "It's life; things happen," he asserts. "She's a great person. She's a talented girl. We had a great relationship for how long it lasted, but now I've never been in a better place. I think things happen for a reason. I've been focused on nothing but my music, which is a good thing. When I go someplace, I stand alone. It's not like, 'Oh, it's Chuck and Julianne,' or 'It's Julianne Hough's boyfriend,' so I like where I'm at. I'm at a good place. I'm happy for her. I wish her nothing but the best, even if it is with whoever."

Chuck and Julianne's paths will cross on June 7, when both singers participate in the annual City of Hope Celebrity Softball Challenge, along with Carrie Underwood, Luke Bryan, Love & Theft and several others. Chuck's new single, 'Hold That Thought,' will be released May 10. He's joined by 'Twilight Saga: Eclipse' actress Julia Jones for the song's sultry video.