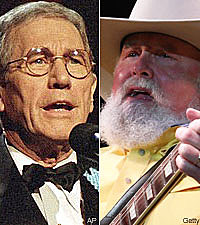 The late Chet Atkins and Grand Ole Opry member Charlie Daniels are among the musicians who will be the latest inductees into the Musicians Hall of Fame in Nashville. Both tremendous musical icons, Atkins is known for his expert guitar skills, as well as being an illustrious producer at RCA Records. The living legend Daniels has had multiple hits in country, bluegrass and Gospel, including the classics, 'The Devil Went Down to Georgia' and 'Long Haired Country Boy.'

Steve Wariner, who helped make the inductee announcement on Tuesday, told The Boot that he was honored to be asked to announce his mentor's name. "Don Everly once said, 'Without Chet Atkins there wouldn't have been an Everly Brothers, and I can honestly say that without Chet Atkins and Dottie West, there wouldn't have been a Steve Wariner," he said.

Duane Eddy, one of last year's new members, told The Boot that the Hall of Fame is important for musicians and fans alike. "It gives the fans a chance to see what they have heard all these years," Eddy, noted for his hits 'Rebel Rouser' and '40 Miles of Bad Road,' continued, "They get a chance to find out about the folks they've listened to all these years on records."

Hall of Famer Steve Cropper of Booker T and the MG's and Blues Brothers fame, agreed, telling The Boot, "The Musicians Hall of Fame shows another side of Nashville, one in which all these great artists come to Nashville to record. It's important that fans realize that Nashville really is Music City."

Others being inducted into the Hall of Fame are pop group Toto, known for hits 'Africa' and 'Rosanna'; surf guitarist Dick Dale; Billy Cox, who played bass for Jimi Hendrix; Victor Feldman, who played with Miles Davis and Steely Dan; producer and record company owner Fred Foster, who worked with Roy Orbison, Dolly Parton, Kris Kristofferson and Willie Nelson; and arranger Paul Riser, who contributed to Motown hits including 'My Girl' and 'Tears of a Clown.'

The formal Musicians Hall of Fame induction ceremony will be held October 12 at the Schermerhorn Symphony Center in Nashville.