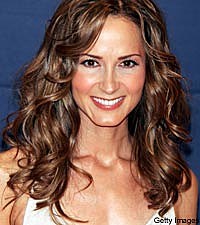 Chely Wright held a 9-millimeter gun in her mouth and was close to pulling the trigger when she had second thoughts that led her to put the gun down, the singer tells NBC's 'Today' show.

The reason for the near suicide was Chely's fear of losing her country music career if her homosexuality became public.

"I finally cried. That's what broke the dam for me," Chely says. "I started to cry and put the gun down, and the next morning I was afraid to go downstairs because of that gun. I got on my knees and spoke out loud to God, and I stopped praying for what I had always prayed for, which was 'Help me figure out a way to still have my career and everything.' My prayer was: 'God, give me a moment's peace.' And I got up, and I had that moment's peace."

Chely explains that she also received a silent message from God that convinced her to finally tell the truth. That prompted her to begin a years-long process that resulted in her memoir, 'Like Me: Confessions of a Heartland Country Singer.'

"I had hit rock bottom," she says. "That's why I started writing my memoir."

Until that point, fear of offending the conservative-minded people she says fill the country music industry kept her from admitting the truth about her sexual orientation. Instead she ducked the issue in personal relationships and told the news media that she wouldn't answer questions about her personal life.

Yet the pressure on her mounted when close friend John Rich confronted her about those rumors.

"Hey, you've got to hit this gay thing head on," Chely recalls John saying. "He asked me point blank, 'You're not gay, are you? If you are, people won't have it. It's sick, it's deviant, it's unacceptable to country music fans ... You're not are you?' And I lied. And I knew that I had gone from not talking about it to being a liar."

Now that Chely has come out in PEOPLE magazine and begun to speak openly about her personal life, her fears have been supplemented with feelings of relief.

"It feels incredible; I feel as if it's my birthday," she says adding she is still waiting to see what the full impact of her honesty will be on her life and career. "I am not not afraid. But I'm not ashamed."