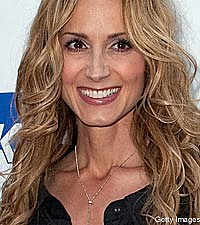 For the past 10 years, Chely Wright has headlined the Chely Wright Reading, Writing and Rhythm concert event to help schools secure musical instruments and to bring awareness to the need for the continued funding of music education in schools. To date, the event has raised more than $1 million toward that goal and has benefited more than 20 states nationwide.

This year's event, held Tuesday night, June 8 at Nashville's Tennessee Performing Arts Center, was punctuated by recent newsworthy events, including the devastating May floods in Nashville and the surrounding area, and Chely's very public coming-out -- situations the singer herself worried could keep fans -- not to mention sponsors or even her fellow artists -- away.

"I was nervous to come back," Chely tells The Boot. "The fans in country music have been incredible. Country music fans are loving and supportive. They know I love 'em, and as Minnie Pearl said, 'If you love 'em, they'll love you back. And boy, are they!"

With a nearly full house in TPAC's Polk Theater, and a stellar lineup that included Trisha Yearwood, Jamey Johnson, Bucky Covington, Justin Moore, SHeDAISY, Buxton Hughes, Jann Arden and Rodney Crowell, support for the singer and her charity was on the minds of all of those who took time out from one of the most hectic, event-filled weeks of their year to stress the importance of offering children the chance to express themselves through music. Attendees were also asked to bring canned goods to the venue, collected by the Second Harvest Food Bank and designated for flood victims who are still trying to recover. More than one ton of food was reportedly collected throughout the evening.

The night also offered Chely's fans the chance to talk with her after the show ended (with a high-energy performance from Rodney Crowell and Chely herself). The singer's meet-and-greet lasted until every fan had that opportunity, wrapping up around 4:30 AM.

Another of the main beneficiaries of this year's event, which also included live and silent auctions, was Kingston Springs Elementary School just outside Music City. The school was severely damaged by flood waters and Chely, who has a home near the school, had heard from friends immediately after the flood that that the school was one of the hardest hit.

While talking to reporters backstage, Chely spotted a young girl who had obviously come into the room to meet her. The youngster told Chely she will be entering second grade at the Kingston Springs school, and was heartbroken when she heard about how badly her school had been damaged. She said she just wanted to let Chely know that her support of her school was "awesome" and very much appreciated, while her mom told the singer that she had been keeping up with the many media appearances Chely had made recently, and was thankful her daughter and others had someone like Chely to look up to as a role model to "just be who you are."

Newly formed duo Buxton Hughes were among the artists who recalled what music education had meant to them early in life. Sarah Buxton (who excitedly revealed that her mom is "always on The Boot"), said, "Every child at a certain age learns to connect with something. With some it's surfing or skateboarding, riding bikes, painting, acting. To me, music was always the one thing that I was obsessed with, even before I ever started writing songs. Both of us freaked out over music as kids." Jedd Hughes agrees, adding, "It's so important in the school systems to keep it alive, to keep it strong. It seems like there's always budget cuts whenever the economy gets rough. The arts are always the first thing to go. It's important to do things like this, especially after the flood, to give back to these kids that lost those instruments, those physical things that keep them inspired."

Kristin, Kelsi and Kassidy Osborn, better known as SHeDAISY, were decked out in matching blue t-shirts which read, "I Survived! Tennessee Flood 2010" and feature a piranha, inspired by the news stories that circulated at the time of the flood regarding the fish that had escaped from the aquarium at the Opry Mills shopping complex. While their shirts may have been whimsical, the trio struck a more serious note with regard to music education. Kristin, who said she and her sisters learned several instruments while in school, added that "as our younger siblings came up in the ranks, that was taken away from them, the funding was taken away. I think what Chely does every year is incredible and it's important. Kids have a chance at finding, if it's not a career, [at least] it's a hobby. It gives them a chance at feeling good about themselves."

While Justin Moore is still a relative newcomer to country music, he's learned quickly that having a successful career also means having more opportunities to give back. "Jake Owen and I were talking the other day about our hometowns," Justin tells The Boot. "When I was growing up, I didn't even know that you could have a career in music. I grew up in a town of 300 people. We didn't have music classes with pianos, guitars and all this kind of stuff. Since I've moved here, I've seen what the artists and the whole industry does for schools around here. I'm actually thinking about doing some stuff back home where I'm from to allow those kids to know that there's opportunity out there in music."

Just a few hours after she wrapped up the meet-and-greet, Chely was scheduled to appear at a Nashville shopping mall with some schoolchildren to continue the discussion of the significant role music education can play in their lives.