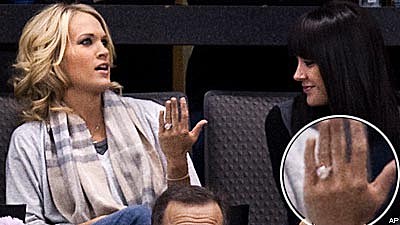 It was the ring flashed 'round the world. For the past year, the country music world has been holding its collective breath, wondering ... Is Carrie Underwood in love? Will she marry Ottawa Senators hockey player Mike Fisher?

The answer came just before the holidays, when Carrie lifted her left hand in an oh, so casual gesture, talking to a friend while sitting on the sidelines, watching her sweetie's hockey game in Canada.

There it was. A diamond ring. Stunning in its brilliance ... and it was huge!

Carrie's jeweler, Johnathon Arndt describes the engagement ring he designed as a flawless yellow diamond. A spokesperson from the Diamond Information Center estimates that the ring looks to be five-plus carats, with a value of around $150,000.

Carrie has worn diamonds by Arndt before.

Fans may recall the diaphanous canary yellow chiffon gown she wore back in 2007 at the Country Music Awards, when she performed 'So Small.' Studded with the jeweler's twin imperial jadelite and diamond butterfly pins, that gown was worth an unbelievable six million dollars.

In a release, Carrie's jeweler congratulated the newly engaged couple, saying, "This ring is a symbol of love from Mike Fisher to Carrie Underwood." And indeed, in the liner notes of her current album, 'Play On,' Carrie revealed to fans what has been nestled in her heart.

"I love you so much!" she wrote. "You make my life better in every way! I thank God for you every day."