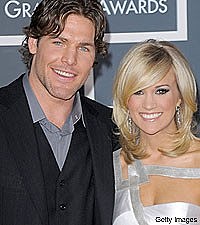 "We could not feel more blessed to have found each other and to have shared this day with our friends and family that mean so much to us!" the newlyweds tell People.

The couple said their "I do"s in an ultra-private ceremony at the Ritz-Carlton Lodge in Greensboro, Ga. Around 250 guests were reportedly flown by private planes to the festivities, not knowing where they were headed until they showed up at the airport.

Carrie and Mike met backstage at her March 2008 concert in Ottawa, Ontario, Canada -- the city where Mike is a star player for the NHL's Senators. The country star has since been to several of her hockey beau's games, learning the ropes of the game. "They need to make the puck neon pink, because I'm having a hard time watching TV and following it," she once joked with Chicago's US99 radio station.

Mike has become equally well versed in country music. Just don't ask him to try to follow in his bride's footsteps. "When I try to sing some of her songs, she just laughs!" he told 'The Sens Show' (quote via People).

After calling Carrie's father to ask for her hand in marriage, Mike popped the question on December 20, 2009, at his home in Canada. He presented his bride-to-be with a Jonathon Arndt-designed flawless yellow diamond ring, estimated to be around 12 carats and worth six figures. But Carrie isn't counting. "He could've put a twisty tie on my finger, and that would've worked," she told Allure magazine.

The happy couple will reside in both Nashville and Ottawa, with a long-distance relationship being something they've certainly mastered over these last two years together.

"He brings out the best in me," Carrie told The Boot last November with a huge smile on her face. "He's a good person. I've felt myself grow with him. He's one of those certain people in your life you come across for a reason. I'm very glad that I met him. He's been a really positive influence on my life."