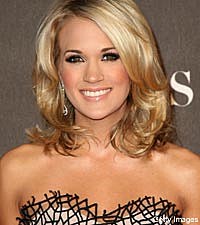 Wedding details continue to emerge for Carrie Underwood and her fiancé, Ottawa Senators player Mike Fisher. Already revealing the dessert (cupcakes), and her hair (big!), the songbird now says she has at least one member of the wedding party secured -- her Chihuaha, Ace.

"He'll be one of the ring-bearers," Carrie divulged to Us Weekly, clarifying that Ace will have minimal responsibility on the big day. "I don't know if I'll give him the actual ring. He would probably run away with it or eat it or something!"

Even if the pup's role isn't very functional, his mama says she wouldn't consider not having him participate in the ceremony. "He's like my kid," Carrie says. "It would be like if I was getting married and I had a child -- of course my child would be in the wedding!"

Staying mum on many of the details, including the actual date, Carrie does reveal that there is a dress "in the works ... it's very much in the beginning stages, but it's very me: it's girly, pretty, simple and glamorous."

Carrie is juggling wedding plans while on the road with her Play On tour, along with opening acts Sons of Sylvia and Craig Morgan. She will take time off the road to perform at the upcoming ACM Awards, where she is nominated for five trophies, including Entertainer of the Year. The 45th Annual Academy of Country Music Awards will air live on April 18 on CBS at 8:00 PM ET.