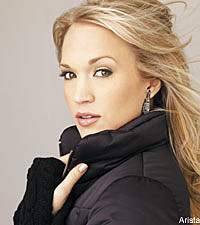 The 25-year-old country superstar opens up about her love life in the September issue of Allure magazine. When asked about the nature of her relationship with Romo, who now dates Jessica Simpson, Underwood explains they were kindred spirits ... and are still in touch.

"We were both small town people doing very big things, and we relied on each other, dealing with fame," she tells Allure of Romo. "I don't know. The phone will ring and it'll be him, and I'll maybe not answer."

Underwood moved on from Romo to 'Gossip Girl' actor Chace Crawford, whom she began dating in late 2007. She says the reason for their split after just a few months of dating was simple.

"We didn't have a fight. No one cheated," Underwood explains. "It plain didn't work."

So who inspired her huge crossover hit, 'Before He Cheats'?

"I don't want to name names, even though he probably deserves it, but he fooled around," she says of the mystery ex. "Oh, yeah -- and lied."

Underwood admits she'd love to someday be a "soccer mom." But finding the right man has proven tough, especially now that she's famous.

"You never really know why somebody wants to be around you, or if they do genuinely like you," she says. "I wish everyone had a label on their forehead so you could automatically tell their intentions. Sometimes you just wish that no one wanted anything from you."

Besides, she's concentrating on her girlfriends now. Underwood has become good buddies with some other big names in the country community, namely Taylor Swift and fellow 'American Idol' alum Kellie Pickler. And who knows, we may even see the three blonde beauties perform together someday soon.

"I want to have a girls-only tour and get some awesome chicks together," says Underwood, "and have us all go out and kick butt."

Check out Carrie Underwood on tour
on TourTracker.com

Filed Under: Carrie Underwood
Categories: Concert News
Comments
Leave A Comment
Back To Top
They Call Them ... What?! 16 of the Best Country Star Nicknames