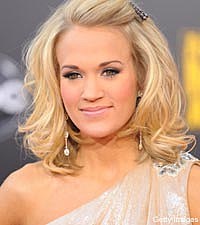 Although the news is unconfirmed at this time, it appears Carrie Underwood could be making waves in a new film set to begin production on Jan. 25 in Oahu, Hawaii. The film, titled 'Soul Surfer,' is a biopic of professional surfer Bethany Hamilton, who lost her arm in a tiger shark attack at age 13 while surfing at Hanalei Bay.

One of the actors in the film, Kevin Sorbo shared information about Carrie being cast in the film via Twitter: "Name of movie is 'soul surfer.' touching story. i will be starring with dennis quaid, helen hunt, carrie underwood, anna sophia robb," he writes.

Anna Sophia Robb plays the role of Bethany, who was back on her board just three weeks after the horrific attack in Kauai. Bethany is now a pro-surfer who placed second at the Billabong tournament last year.