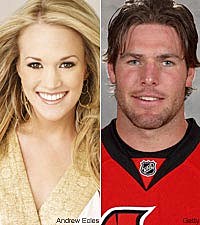 The Ottawa Sun newspaper is reporting that hockey star Mike Fisher popped the question over the weekend ... and his girlfriend of over a year, Carrie Underwood, said yes.

The rumors started swirling Sunday when a so-called "family friend" of Mike's, Colin Peters, wrote on his Twitter page, "Congratulations to Mike Fisher and Carrie Underwood! We just got the call at our family Christmas get together." Colin has since removed the post.

The Ottawa Sun claims a "source close to the couple" confirmed the news today. Carrie was reportedly in Ottawa over the weekend to watch Mike and the Ottawa Senators defeat the Minnesota Wild, 4-1.

There has been no official word yet from Mike or Carrie's camps. But if the rumors are true, 'Carrie Fisher' certainly has a nice ring to it!