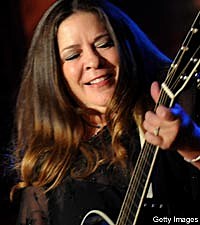 There's no denying that country music veteran Carlene Carter comes from an impressive lineage. She's the daughter of June Carter Cash and country music pioneer Carl Smith, the granddaughter of the legendary 'Mother' Maybelle Carter and stepdaughter of the Man in Black, Johnny Cash. Given her most recent loss -- her dad passed away in January -- and having dealt with four marriages and a battle with substance abuse, Carlene is accustomed to pushing through pain.

Carlene's mother, stepfather, and 45-year-old sister all died in 2003, as did her longtime companion, musician Howie Epstein of Tom Petty and the Heartbreakers. "Everyone deals with loss," the 55-year-old singer-songwriter tells CapeCodOnline. "I'm no different but we all find our ways of coming through things. Is it tough? Of course, but you find the strength to push on through."

Carlene maintains that she has held true to one philosophy throughout her life. "I fly from the seat of my pants, basically,' she says. "I've always been one to throw caution to the wind, and my motto has been 'Never have a dull moment.' Sometimes it works and sometimes it doesn't, but I don't think I'd have it much differently."

Carlene notes that music helped her through some tough emotional times. Her 2008 album, 'Stronger' features a title track which she says helped her get through some of the pain of her sister's death, and allowed her to process "a lot of things there ... it was a great release and a blessing."

Although there was a 13-year-gap between 1995's 'Little Acts of Treason' and 'Stronger,' Carlene insists it won't take another decade for her to make a new record. "Oh no, that won't happen. When I stopped in '95, I wasn't ready to retire creatively ... I just wasn't really ready to make the record I needed to."

Carlene is now working on new songs as well as a tribute to her father, Carl. "The problem is that so many people don't know that much about him and his influence," she notes. "I want to do something really creatively like a mix of live CD recorded work and a DVD; I think people need to know more about his legacy."

Carlene admits that she learned a lot from her prolific musical family. "Grandma and mama showed me that you always have to give as much as you can, no matter what. They played to thousands of people, and they could also play to 10, but they always understood that people were coming out to see you and that you needed to give back to them. You have to have the energy, no matter what."

Carlene obviously not only inherited the musical genes, she grabbed a little DNA from her mother's funny bone. "I learned from my mama not to take myself too seriously. I remember when Big John [her name for her stepdad] was going to play the White House ... and mama told him that she thought he was getting a big head about it, and if he did, something was going to happen. Well, he went to bow and split his pants right there. So you always need to stay humble."