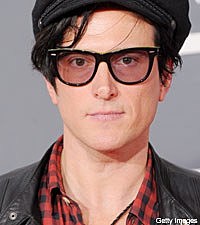 While Taylor Swift and Stevie Nicks fans were no doubt excited to see the somewhat unlikely pair performing together at the Grammy Awards on Sunday night, many were likely also wondering, "who's that banjo player standing up there with them?"

Singer-songwriter Butch Walker is a Georgia-born musician who, in addition to fronting several alternative rock bands, has written and produced songs for Pink, Avril Lavigne, Fall Out Boy and Bowling for Soup, among many others. In 2007, his life took a tragic turn when he lost everything he owned in the Malibu wildfires, including the masters of all of the songs he'd ever recorded.

The Taylor connection began last November, when Butch was appearing in a series of concerts at the Hotel Cafe in Los Angeles. He asked fans to request songs he should cover, using his Twitter account to take suggestions.

On he first night of the residency, Butch busted out his version of Taylor's hit, "You Belong with Me," which was the No. 1 request from his fans. Later that night, he recorded his own banjolin-based version of the song, filmed a making-of video and posted the results on his Youtube channel. In less than two days the video went viral and was soon followed by a Taylor tweet which included a link to the video: "@butchwalker covered You Belong With Me and I'm losing my MIND listening to it! Blown away," the young superstar shared with her followers.

Butch Walker's latest album, 'I Liked It Better When You Had No Heart' will be released Feb. 9 on vinyl and on Feb. 23 on CD and digital download via One Haven Music. Each CD will include a free download card of Butch's cover version of 'You Belong with Me.'