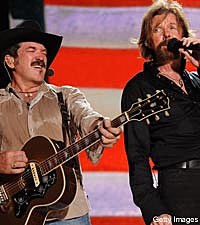 Kix Brooks and Ronnie Dunn vividly remember where they were when they heard the news of the September 11 terrorist attacks. On this eighth anniversary of the tragedies, their memories are bittersweet.

"We flew right into Pennsylvania two days after, not far from where the plane had gone down," Ronnie shares (via CMIL). "There was a fair. We had talked about canceling it, because we didn't think it was appropriate. We decided to do it, people were showing up ... To this day, it's emotional to even think about that."

"I remember jumping on Ronnie's bus, because it just dawned on me," Kix continues, "the first line of the song, 'The sun coming up over New York City,' and it just hit me. We were opening the show with it anyway. I said, 'Is this weird for us to just go yee-hawing out there?' And we realized when we walked out and hit that song, that audience was packed with flags and signs and 'God Bless the USA,' and to look out across that audience, I breathed such a sigh of relief. It's like 'Oh yeah. They got it. They came here to party. They came here to celebrate this country, and this is going to be a good night.'"

This week, Brooks and Dunn released a compilation of hits from the past 20 years, titled '#1's...And Then Some.' Listen to the full CD here.