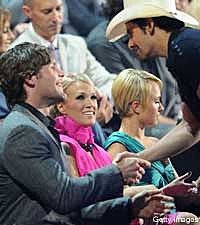 Just a few weeks before Carrie Underwood and Mike Fisher, tied the knot, Brad Paisley was on hand to offer guidance and support to her hubby-to-be.

"Mike was hanging out in Nashville [last month]," Brad recently shared with Lon Helton on his Country Countdown U.S.A. radio program. "I saw them at the CMT Awards, and I finally got to meet him. I said, 'Well we should get together if you get bored.' Carrie and I then filmed a thing for the CMA Music Fest together. She said, 'Were you serious about that?' I said, 'Yeah, absolutely!' So she gave me his number, and I called him and said let's go to lunch."

After lunch, Brad and Mike rode around Music City and eventually ended back up at Brad's farm outside of town. "I brought him out to the farm and showed him where we're building our lake," Brad recalls.

While at the Paisley household, Mike got to see another side of what he can expect in the years to come after saying "I do." "He got to see what a one-year-old and a three-year-old are like," Brad said with a laugh. "They won't be having kids for a while, after that!"

During their outing, Brad shared with Mike the secret to making a marriage work with two spouses in the entertainment business. Brad, of course, has been married to actress Kimberly Williams-Paisley for seven years.

"We were talking about the travel aspect," Brad says. "Kim and I, over the first few years with no kids, had the ability to go wherever we wanted. She could take a movie and be on the other side of the country and away from me for four or five days. Then, getting back together was wonderful. They have that luxury at that point in their lives. He's busy with his job; he's obviously not going to play hockey for the rest of his life. [Carrie's] as hot as she can be. They're able now to enjoy that travel process and be away now and then. They haven't eve been together for more than a week or so, I think. They're just like us. It's going to work well."

Carrie and Mike are currently still out of the country on their honeymoon, while Brad is kicking back up on his H2O tour this week.