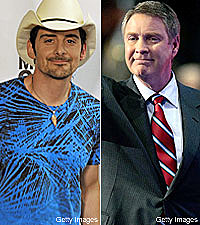 Brad Paisley's new H20 World Tour not only points out the fun aspects of water, but it also draws attention to the serious side of it as well. Brad partnered with the organization Hope Through Healing Hands to help raise funds and to bring awareness to the fact that millions of people around the world do not have access to safe drinking water.

How he came across the safe water initiative was nearly by accident. "I've become friends with [Senator] Bill Frist, and Bill and I went to Washington, D.C., to the Alfalfa Dinner," Brad explains to The Boot. "He took me as a guest to see and meet all these guys. It was the most insane room I've ever been in. Colin Powell comes up and says hello, and then he's talking to [California Sen.] Dianne Feinstein, and then there's [Mississippi Governor] Haley Barbour 'Hey Haley Barbour. How've you been?' I played an event for him. Then you've got [Vice President] Joe Biden."

"And everybody you see is walking around in this place," Brad continues. "On the airplane, [Sen. Frist] was asking about things that were going on, and I told him about that we were going to have the H20 tour and if he knew of any charities. And he said, 'Absolutely. Through the one I'm involved with.' He said it's the biggest problem in the world. It gets overshadowed by disease. It gets overshadowed by natural disasters and everything else -- the largest killer of both children, and I think people in general, is unclean water. I think one billion people are without it, or something like that. And his theory is this, 'If we can go in these places by digging a well or whatever, this is the biggest thing we could do for the world as the wealthiest nation.' So, we decided to pair that up and make that a part of the [tour] too, so we're not overlooking the fact that water is also very important as well as fun."

Senator Frist, his family and staff were on hand in Virginia Beach for the kickoff of the H20 tour. "It was so exciting to be there for the very first show," says the Tennessee senator, who helped to found Hope Through Healing Hands. "We have a great booth, and we signed up many interested activists and donors for this important campaign for clean water."

The show's headliner stopped by the booth to say hello and picked up one of the Water=Hope campaign t-shirts to help spread the word of the organization even further.