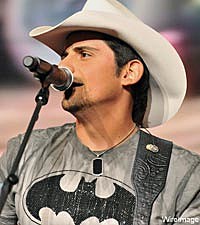 Brad Paisley is ready to kick off his much-anticipated H20 world tour this weekend, or ready as he'll ever be when he hits the stage on Friday in Virginia Beach, Va., and Saturday in Washington, D.C.

Over the past couple of weeks, Brad, his band and crew have been working to salvage what was left of his staging, instruments and production elements after the devastating flood in Nashville rushed through the storage facility housing his gear. Brad's team were expected to begin rehearsals on May 3, the day of the flood, and it was not until May 7 that they were actually able to gain access to their belongings. After assessing the damage, his crew went into recovery mode, ordering new equipment or arranging for the refurbishment of others. Late last week, they were finally able to rehearse a few days before heading east. Brad recently tweeted, "My guys are MIRACLE WORKERS. This tour is going to mean so much more to us than ever."

When Brad returns to the road, he will have his main 1968 Paisley Telecaster with him. It was actually at his home, high and dry. He'll also have special guests Darius Rucker and Justin Moore sailing along on the now rather ironically-themed trek.

"It's an easy theme," Brad tells The Boot. "Somebody threw out dunking booths for DJs ... there's so many of them. I'll be out there myself with the first pitch. And the same with talking about the fun aspects of creating a little water park, creating a theme park at a time when people are going on vacation."

The tour, which has partnered with Hope Through Healing Hands' campaign for clean and safe water, will include a Water World Plaza, featuring the secondary stage with performances by Steel Magnolia, Easton Corbin and Josh Thompson, as well as a fishing simulator, dunking booth and more.

The H20 world tour is set to hit more than 75 cities in the U.S., Canada and Europe over the next year, and dates have been posted on Brad's website through September 25 in Denver, Colo.

on TourTracker.com
Filed Under: Brad Paisley
Categories: Country News
Comments
Leave A Comment
Back To Top