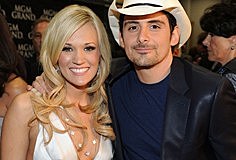 It's hardly a secret that Brad Paisley and Carrie Underwood have a great deal of mutual admiration for one another. And Brad continues to sing Carrie's praises as often as he can.

"I think she's the best singer we have, maybe ever had," Brad tells FOX News of his 'Remind Me' duet partner. "When she came into the studio and sang her parts for this song, she nailed it."

The sultry duet appears on Brad's current album, 'This Is Country Music,' and serves as the third radio single from the critically-acclaimed collection. Carrie reveals that the collaboration was a long time coming, but admits both artists didn't want to jump the gun.

"We're not gonna sing 'Yankee Doodle Dandy' just because we both know it and we need to sing together," Carrie quips. "We both wanted to do this."

She adds, "It was the most unorganized thing I had ever been a part of. I had never done anything like that before. It all worked out so perfectly. I was so happy. I felt like that was given to us. I was so excited about the song once the words became established and I was so happy he didn't deliver [his album] on time. It kept it in the moment, just doing it off the cuff. It wouldn't have been the same song had we recorded it and recorded it."

The singing partners also recently announced they will reunite to host the 2011 CMA Awards, marking the fourth-consecutive year for the duo. "I love working with Carrie," Brad confesses, "She's a class act and a complete balance to my non-class act. I'll try my best to not mess it up."

Carrie shares similar feelings for the reigning CMA Entertainer of the Year. "I'm so honored to be asked back with my friend, Brad," she says. "The creative process of getting ready for the show is a blast, and I look forward to sharing Country Music's Biggest Night with all the fans!"

'Remind Me' currently sits at No. 12 on Billboard's Country Songs chart, and is the follow-up to Brad's No. 1 single, 'Old Alabama.'