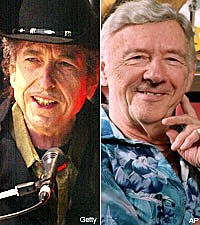 Time Magazine once called singer-songwriter Bob Dylan a "master poet." And while he's written some of the most important, influential works of a generation, an early piece of "poetry" he was believed to have penned is now causing some confusion.

On May 19, Christie's auction house announced the sale of a handwritten manuscript containing 'Little Buddy,' a poem a teenaged Dylan had purportedly written while at camp in 1957. The following day, however, Christie's announced that the lyrics, with a few minor changes, actually appear to be the work of late country-music legend Hank Snow.

Reuters reports that they had discovered the lyrics matched the Snow song when alerted by a reader, and also said that Hank Snow fans had informed Christie's of the oversight.

In a statement, Christie's said, "Additional information has come to our attention about the handwritten poem submitted by Bob Dylan to his camp newspaper, written when he was 16, entitled 'Little Buddy.' The words are in fact a revised version of lyrics of a Hank Snow song."

The auction, however, will go on. "This still remains among the earliest known handwritten lyrics of Bob Dylan and Christie's is pleased to offer them in our Pop Culture auction on June 23," the auction house confirmed. Christie's expects the manuscript to bring in $10,000 to $15,000.

Christie's said the piece was signed "Bobby Zimmerman" (Dylan's real name is Robert Zimmerman) and that it had been submitted it to the camp newspaper. The editor of the paper kept the manuscript for more than 50 years and had recently donated it to Herzl Camp, a Jewish camp in Wisconsin.

Hank Snow, who was born in Nova Scotia, Canada, in 1914, wrote the music and lyrics for 'Little Buddy,' and recorded the song in Montreal in December 1947. Snow, a member of the Country Music Hall of Fame, died in 1999. One of his most popular hits, '(Now and Then There's) A Fool Such As I,' has been recorded by dozens of artists including Elvis Presley ... and Bob Dylan.

Filed Under: Hank Snow, HankSnow
Categories: Country News
Comments
Leave A Comment
Back To Top
Morgan Evans Knows 'Love Is Real,' and It's All Around Us