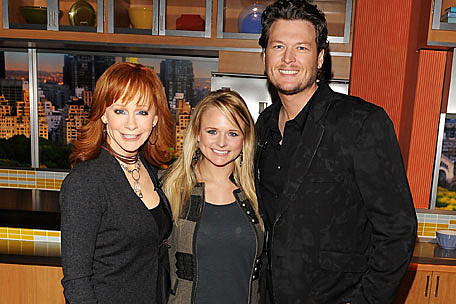 Nine days after the deadly tornado that touched down in Moore, Okla., Blake Shelton and friends will be staging a relief concert that will air on NBC. Details of the 'Healing in the Heartland: Relief Benefit Concert' were announced Friday afternoon. The event will serve as a telethon, with proceeds going to the United Way of Central Oklahoma May Tornadoes Relief Fund.

The concert will take place May 29 at 9PM ET, airing on 'The Voice' coach's home network, as well as on E!, Style, G4, Bravo and CMT. Shelton will headline, and fellow Oklahomans Vince Gill and Reba McEntire will join him and Miranda Lambert as performers. Additional guests will be announced soon.

"Everyone has their way to help, and mine as an entertainer is to perform to help raise money and awareness for this tragedy," Shelton said in a statement. "This is why I want to do this special and especially hold it in Oklahoma City, which is near ground zero."

'Healing in the Heartland' will be televised from the Chesapeake Energy Arena in Oklahoma City. Tickets for the event go on sale Saturday (May 25) at 10AM CT and start at $25.

"Working hard on putting this benefit together," Shelton tweeted on Thursday. "Gonna be a unbelievable line up for a great cause. #PrayForOklahoma."

On Tuesday, Shelton indicated he was working with NBC to arrange the benefit. At the time he hinted he'd be calling in favors from artists in all genres to perform. He specifically hinted that he'd ask Usher to help.