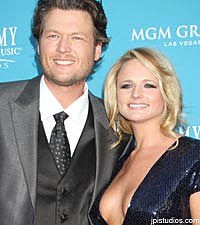 Miranda Shelton certainly has a nice ring to it ... for the country songbird who's sporting a new ring!

Blake Shelton popped the question to longtime girlfriend Miranda Lambert over the weekend. The bride-to-be says she was completely surprised by the engagement, which happened while the two were out in the woods near their Tishomingo, Okla. home ... after Blake did his gentlemanly duty of asking for her hand in marriage, of course.

"He called my dad and got his blessing first," Miranda tells PEOPLE. "That was so Southern and old-school and perfect."

Miranda was equally surprised by her diamond and platinum engagement ring. "I was so proud of him," she gushes. "We've been together five years, so he knew exactly what I wanted but it's so much more perfect than I could have picked out myself." 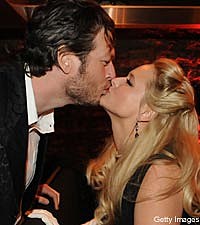 Blake has been hinting that the engagement was coming soon. In his interview with The Boot back in March, he told us that marriage was finally a topic of conversation in their household. "We've had our ups and downs, our high points and low points, but we're stronger together now than we've ever, ever been," he told us. "For the first time, I can see that [engagement] happening, and she can too!"

This engagement is the icing on the couple's 2010 cake, as it has certainly been an amazing year so far for them. Blake topped the country charts with his latest release, 'Hillbilly Bone,' and picked up an ACM Award for its title track. Miranda won three ACMs -- Video of the Year, Album of the Year and Top Female Vocalist, and also scored her first No. 1 song with 'White Liar' earlier this year. Additionally, the two are nominees at next month's CMT Awards.

"2010 will not be forgotten in my world," says Miranda. "Weddings are great and engagements are great and diamonds are especially great ... But I'm just excited to be married, because I want to tell Blake I really can love him the rest of my life and be happy and make him happy."

You can see a photo of Miranda's engagement ring in the new issue of PEOPLE magazine, which hits newsstands on Friday, May 14.