Blake Shelton received a tweet last night during the 'Country Comes Home' Grand Ole Opry show that surprised him so much he couldn't immediately respond. The message was brief and to the point: "You are invited to join the Grand Ole Opry."

The message was delivered to Blake by his buddy Trace Adkins. The two had just finished performing their hit duet, 'Hillbilly Bone,' on the Opry stage. Blake waved to fans in the sold-out auditorium and proceeded to exit the stage. "Wait a minute, Blake," Trace said, pulling out his cell phone as he called him back. "You are always on the Internet tweeting your fans; now someone has sent you a message via Twitter."

Trace then showed Blake the message while it also flashed on the big screen that was placed strategically so everyone could see the performers. Blake just shook his head, then walked away from the front of the stage for about 30 seconds, presumably to gain his composure before saying anything. 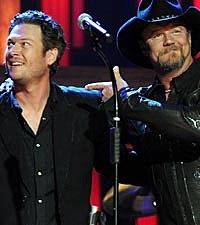 "You could say thank you," Trace said as Blake searched for words to answer the Opry's invitation.

"I know a lot of guys who want this as bad as I do ... but forget about them," Blake joked once he was able to speak. "I don't know what I did in the last year to make Nashville finally notice me! (To which an audience member jokingly responded: 'Miranda Lambert!' The two country stars became engaged earlier this year.)

"This moment, hands down, is the highlight of my career," Blake said. The singer moved to town from Ada, Oklahoma, while still a teenager, seeking to make a career in country music. One of his mentors was the late Mae Boren Axton, who wrote 'Heartbreak Hotel' for Elvis Presley. She had seen Blake perform in Oklahoma and urged him to come to Nashville because she saw potential in the young man. Blake followed her advice and moved to Music City when he was 17. He began writing as much as he could, performing with a group of his peers called the Young Writers, which was sponsored by 'American Songwriter' magazine. It took a few years, but he signed with Giant Records. That label soon closed, but Blake was picked up by Warner Bros. Nashville.

The singer had instant success with 'Austin,' and later 'The Baby' and 'Some Beach.' These were followed by 'Home' and 'She Wouldn't Be Gone,' all No. 1 tunes.

Blake will be officially inducted as a Grand Ole Opry member on October 23.