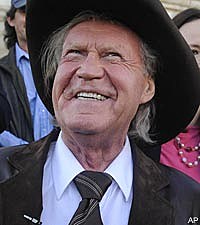 Billy Joe Shaver wants his bullet back --- and he's not kidding.

In a YouTube video, the 70-year old singer-songwriter talks to a crowd at the Firehouse Saloon in Houston, just hours after he was acquitted on a charge of aggravated assault stemming from a 2007 shooting in Lorena, Texas.

"They asked me, 'What are you going to do about that boy you shot?'," Billy Joe told the raucous crowd. "I said, 'I'm getting the damn bullet back.' That's true. You all think I'm joking. Walking around being famous with my bullet in him. Stealing all my press."

Billy Joe, who testified the shooting of victim Billy Coker was in self-defense, continues, "I swear I'm sorry all that ... happened, but it did, and God was good enough and you all were good enough to give me prayers and everything."

Outside the courthouse after the verdict, Billy Joe said he hoped he and Coker could eventually be friends. Billy Joe still faces a charge for unlawfully carrying a handgun in Papa Joe's Texas Saloon in Lorena on the night of the shooting. He faces up to 10 years in prison if convicted on that charge.