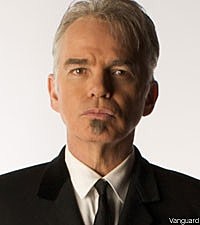 If you're going to call Billy Bob Thornton an actor, don't do it to his face. The Oscar winner is now concentrating on his music career, as a singer, songwriter and drummer for country-rockers The Boxmasters. So, when Thornton visited Canada's CBC radio station on Wednesday, he was more than a little miffed that the host mentioned his Hollywood career.

Thornton was visibly annoyed and stayed quiet during the first half of the interview, with the exception of the occasional "I don't know." But it was when host Jian Ghomeshi asked about his musical influences as a child that Thornton finally started to speak up, even though he didn't exactly answer the question.

"I subscribed to a magazine called Famous Monsters of Filmland," he said. "They had a contest where you could build your own model -- a King Kong ... Frankenstein, Phantom of the Opera. I entered it once but didn't win anything."

"And where does the music fit into that?" asked a perplexed Ghomeschi.

"Music? It was a monster magazine," Thornton answered, glaring at the host.

"But given that you're passionate about music ..." Ghomeschi continued.

"Would you say that to Tom Petty?" Thornton barked.

"Would I say that he's passionate about music? Yeah," Ghomeschi answered.

"Would you explain why it's not a hobby?" Thornton asked.

"Are you reacting to the fact that I said you ..." Ghomeschi replied, obviously realizing that Thornton was angry at even the slightest mention of his acting career.

"Yeah, I am, since you're instructed not to talk about s--- like that," said Thornton. "That wasn't supposed to be mentioned ... We also said that we didn't want to hear anything about how this [music] is my 'first love.' You wouldn't say that to Tom Petty, would you?"

Ghomeschi argued that he only mentioned Thornton's big-screen accomplishments to give context, and that he indeed was interviewing The Boxmasters as a band, not asking a single question about movies. But Thornton argued that he'd rather not have the two worlds collide and only wanted to be known, at least in this interview, as a member of The Boxmasters. The musician argued that his band has plenty of context without having to interject the Hollywood connection.

Thornton's annoyance with being known primarily as an actor is nothing new. He told The Boot in our own conversation with him that he is tired of his films overshadowing his music.

"Whenever anyone says I'm an actor making a record, I tell them to kiss my ass," he told us in a very candid (and much less awkward) interview, during which he also announced that he's changed his name for his music career to W.R. "Bud" Thornton.

The Boxmasters are set to release their fifth studio album, 'Modbilly,' on April 21. It will include one disc of original songs and a second disc of covers. The band is currently on tour with Willie Nelson and Ray Price.