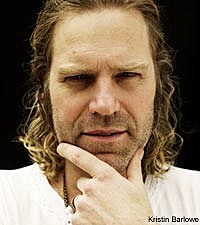 Ever since he began flipping his guitar over to flash the words, 'Love Everybody,' while performing with Big & Rich, Big Kenny has made it his personal mission to spread love and "encourage mutual responsibility for the betterment of humankind," as he says on his website.

An active humanitarian, Big Kenny has helped spearhead a major historical preservation development in Deadwood, S.D., traveled twice to earthquake-ravaged Haiti to help search for survivors and aid with rebuilding efforts, and is also actively involved in a movement that raises awareness about a destructive new form of mountaintop removal coal mining that is blowing mountaintops off the Appalachians. Now, of course, he's helping Nashville dig out and rebuild in the aftermath of the recent flood disaster.

In April, the singer lovingly enfolded his music and his humanitarian endeavors into Big Kenny's Love Everybody Traveling Musical Medicine Show, to take his message of love and "music without prejudice" on the road. And earlier this week, he announced that he and his Glotown entertainment company have partnered with Scott Siman of RPM Management for personal management, and to oversee his blended entertainment and humanitarian endeavors.

"I am jazzed to be representing the talent and humanitarian interests of Big Kenny," says Siman. "Just as Kenny does things differently musically, we are going to match him with a new business model and unique marketing approach for his artistry and humanitarian efforts. It's easy for the industry to put someone like Kenny through the same types of things that have always been done, but I want to build a system and a support team tailored to the way Kenny creates his music and art. And he knows how to write smash hits!"

Big Kenny has known Scott since working with Tim McGraw on the single, 'Last Dollar.'

"(Scott's) track record as an attorney, label executive and manager is unparalleled," says Big Kenny. "I appreciate his perspective on the changing entertainment industry. He has proven that he is not afraid of trying new and different ways of marketing and promoting music and art. And he is a fine golfer!"

Big Kenny's Love Everybody Foundation, established to further his charitable works, is affiliated with the Community Foundation of Middle Tennessee.