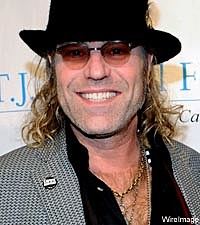 Deeply moved by the devastation of mountaintop mining in the Appalachian Mountains, Big Kenny has thrown himself heart and song into an impassioned movement called Music Saves Mountains. Along with artists including Emmylou Harris, Sheryl Crow, Dave Matthews, Kathy Mattea, Patty Loveless, Patty Griffin, Buddy Miller, Gloriana, James Otto and more, Big Kenny will take the stage at the Ryman Auditorium on May 19 in the biggest gathering ever to raise awareness about mountaintop removal coal mining -- a destructive new form of coal mining that is literally blowing the magnificent mountaintops of the Appalachians to smithereens, just to get to thin seams of coal beneath their majestic vistas.

As a result, the Appalachian Mountains have been ravaged, with 500 peaks now leveled, forests destroyed, streams polluted, and countless coal mining communities below laid to utter waste.

To see Big Kenny's spontaneous performance of his own personal PSA on the evils of mountaintop removal -- which he wrote on the spot, following his video shoot -- and also photos from the video shoot, click here.

Tickets for the Music Saves Mountains concert are on sale now at the Ryman Auditorium box office and at www.ryman.com. You can also order by phone at 1-800-745-3000. To learn more about the movement to stop mountaintop removal coal mining, click here.