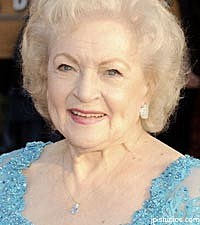 Betty White, who has been a television staple since 1949, has been having the time of her life lately. She scored a touchdown with a memorable Super Bowl commercial this year (in which she was thrown to the ground by a flag-football team player), and there's also a grassroots campaign underway (via Facebook) to have her host 'Saturday Night Live.'

Betty's career on the small screen brought to life two of the funniest characters ever created for television: 'The Happy Homemaker' Sue Ann Nivens on 'The Mary Tyler Moore Show,' and the sweet, dim-bulb roommate Rose Nyland of 'The Golden Girls.'

Betty feels she's "the luckiest old broad on TV" having had the opportunity to bring both these characters to life. Asked if she thinks either fictional character would like country music, she says with a laugh, "I'm not sure Sue Ann would have liked country music unless she met a country music singer, and, of course, she'd go for him!"

So maybe Sue Ann, who never met a man she wouldn't date, would like the classic Lefty Frizzell hit, 'If You've Got the Money, I've Got the Time'? "I think she would have changed the title to "Even If You Don't Have the Money, I've Got the Time," Betty tells The Boot. "She was the neighborhood nymphomaniac. I think Rose might have liked 'Goodnight Irene,' ... but that might be better for Sue Ann, although she would have changed the name to 'Goodnight Sue Ann.'"

"Country music tells stories, and it's also basic," Betty tells The Boot. "It's the kind of music that reaches right inside of you because it's simple and it's direct. I just enjoy it thoroughly. It's relaxing and nostalgic. It can turn on some lovely memories and sometimes some poignant ones."

Betty's favorite country songs include Dolly Parton's '9 to 5.' "I like Dolly's whole approach to life with ongoing and uplifting songs. I never met Dolly but everything I ever heard about her she was a great gal to know and you could kind of get it in her music and her voice and her approach to lyrics." Another of her favorites is 'Sixteen Tons' by Tennessee Ernie Ford. "I knew him, and Ernie was a very likable guy, and the power of his voice was amazing!"

So if she does get the "golden" opportunity of that SNL host gig, it sounds like Betty, Sue Ann and Rose would all be in favor of a musical guest from the country world!

Categories: Humor, Interviews
Comments
Leave A Comment
Back To Top