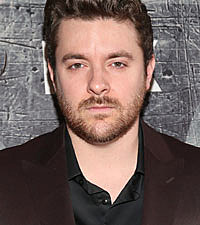 Everyone knows when it comes to getting ready for awards shows, most female singers have a glam squad of makeup artists and hairstylists to help them get ready, but what did the guys do to get ready for Monday's American Country Music Awards in Las Vegas? The Boot caught up with some of your favorites on the red carpet to find out.

"Everybody from my manager to my publicist -- everybody that's not on my road crew that's on the team -- is female. So I basically just stand around and let them nit pick everything," Chris Young said with a laugh. "I don't really have to do anything. I just put on clothes and stand there and let them swoop in."

"You've got to do the makeup thing because you're going to be on TV," ACA co-host Trace Adkins told The Boot of prepping for the show. "That's really about it for me. I don't have to do anything to my hair." 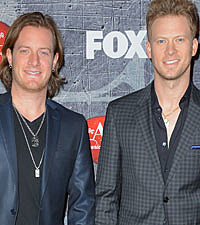 So what did Florida Georgia Line's Tyler Hubbard and Brian Kelley do to prepare? "Make a drink," Brian said with a grin. "We shower up, put on a suit and make a drink. It's pretty simple."

"Then we make another drink," Tyler laughs.

Practicing being a good husband, Lee Brice spent time before the ACAs helping his fiancé Sara get ready for the big night. "I got here about two hours ago and rolled up in the room. My fiance was getting ready and I was actually helping her turn the hairdryer on and get the curling iron on," says Lee, who will tie the knot with Sara on April 21. "I was helping her more than I was getting myself ready. I just throw my jeans on and my jacket and I roll out."

Dustin Lynch spent a relaxing day before hitting the red carpet before the show. "I woke up and shaved, hit the gym, ate some lunch and here we are," he said, noting that he had a little help in getting ready. "I have my mom, Patty, out here this week. She's my date tonight. She pressed everything and got me looking right." 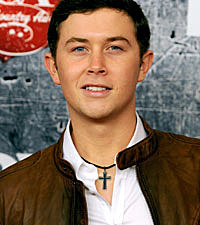 Scotty McCreery was pretty low key when preparing for the event. "I bought all this myself and dressed myself tonight," he says, noting he didn't use a stylist's help in getting ready for the show. "I'm kind of casual tonight, nothing too crazy. It's just all me. I haven't really bought clothes in about a year or two. I don't like shopping."

Unlike many guys who planned to hit the casinos after the show, 19-year-old Scotty isn't gambling age. So what does he do in Vegas? "SportsCenter is always on TV," he says with a laugh. "I got to see Garth [Brooks] here earlier this year. That was pretty incredible to see him perform. He's one of my childhood heroes. Other than that, I'll walk the strip and go get McDonalds or something."

Click here for a list of Monday's American Country Awards winners, and flip through fashionable photos from the red carpet below.

Watch Carrie Underwood at the ACAs