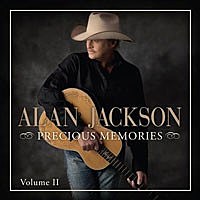 Alan Jackson is getting ready to release a new set of gospel tunes. The Georgia native, who released his first spiritually-themed album, Precious Memories, in 2006, will follow up with Precious Memories Volume II later this month. And, the superstar couldn't have made either without his wife Denise.

The original collection of hymns was created by Alan as a Christmas gift for his mother, and intended only to be shared among a few of his close family and friends. Encouraged by others to release the project, Precious Memories took the singer-songwriter to the top of the charts and sold more than two million copies. While Alan has become a household name by singing songs like "Don't Rock the Jukebox" and "Chattahoochee," he acknowledges that it was his start singing in his church as a child that helped launch his legendary career.

"I'd stand up and sing when the congregation was singing out of the hymn book," he explains. "Some of those melodies are a little tricky for a kid unless you knew the song real well. But I don't remember thinking much about it. Everybody just stood up -- if you didn't stand up, you know, everybody was staring at you -- so you had to stand up and act like you were singing anyway! But I went on to sing as a teenager. They had some organizations and choirs, and I remember singing in those some. And those were some of the early development for me as a singer, and that was probably the early days of getting a little confidence as a singer. The church and the activities that went with it affected me as a singer."

The 54-year-old admitted last year that he was interested in releasing another collection of hymns. "My mama, she's getting pretty elderly and doesn't get out much, but I'd still like to do another version of that for her, and especially my wife's mama," Alan told The Boot. "She's older than my mother but she gets around better, and she loves that thing. And they would love to have another version with some more new songs, so I need to do that. It doesn't take more than a minute to record it, it's so simple."

Precious Memories Volume II will be released on March 26.