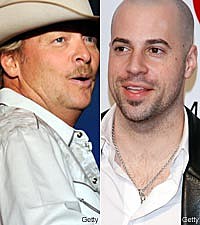 Sure, Chris Daughtry is a hard-rocking frontman who loves his Bon Jovi and Metallica. But the arena rocker admitted he's not afraid to cry, and Alan Jackson is the guy who can do it to him.

"'Remember When' from Alan Jackson is a song that kills me," Chris tells The Boot. "That's like the cycle of a marriage [and] listening to that song with my wife we're both like getting all choked up. That's one that I listen to and I understand everything that he's talking about. It's just a beautifully written song."

In July, country's go-to harmony singer Vince Gill popped up on Daughtry's new album, 'Leave This Town,' and as it turns out, Chris isn't the only member of his band with a weakness for country. Guitarist Josh Steely also tears up at a country tune, but he goes a little more old school. "When I was a kid I used to love this Kenny Rogers song 'She Believes in Me,' because my dad used to go on tour and it just reminded me of dad," he says. "But as I grew up and got married and got into this band, and I listened back to that tune, I couldn't have said it better. I couldn't have said to my wife, thank you, more than Kenny Rogers did."

Apparently, that country influence is rubbing off on the little ones too. While daddy Daughtry is a big star in his own right, it was another of Nashville's finest that impressed his kids. "I got to take them to the Taylor Swift show, and they got to meet her. It was way cooler than what I do," Daughtry tells us.

Don't feel bad, Chris. Right now, it's Taylor's world and we're all just living in it.