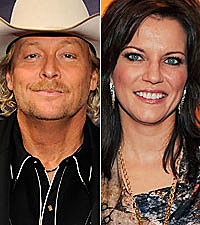 Martina McBride figuratively steps into the glittery ballroom dress of Loretta Lynn, while Alan Jackson affects the sexy swagger of Conway Twitty on the remake of the legendary singers' 1973 No. 1 hit, 'Louisiana Woman, Mississippi Man,' from the new collection, 'Coal Miner's Daughter: A Tribute to Loretta Lynn.'

Martina is a big fan of the lanky singer-songwriter and had hoped he would agree to join her on the duet. "I love Alan's voice. He's one of my favorite singers. He always has been," Martina tells The Boot. "He's just a great, great country singer, and we worked together on his last album. It just seemed like he was the right fit. We did 'Louisiana Woman, Mississippi Man,' and I knew he would nail it, and he did. I can't wait for you guys to hear it!"

As far as the honoree herself, the Kansas native could not be more in awe of the friendship she shares with the legendary entertainer. "Loretta is ... she's just who she is. She's so real and honest, and I've just always admired that about her music and about her. I've been fortunate enough to be able with talk to her a lot over the past few years, and she's reached out to me several times. It just means the world to me, because she is an icon. She is an original. There's nobody else like her, and I'm really happy that they're honoring her."