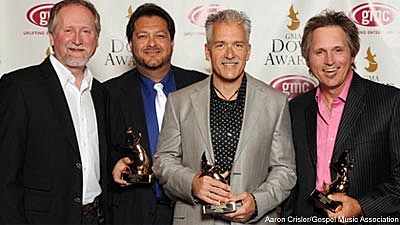 Casting Crowns were named Artist of the Year. Heath took home his second consecutive Male Vocalist award and Battistelli, who revealed she's expecting her first child, won her first Female Vocalist honor as well as Short-Form Video for 'Free to Be Me.' Tenth Avenue North's moving ballad 'By Your Side' was named Song of the Year. Needtobreathe won three awards -- Group of the Year and Rock/Contemporary Album of the Year for 'The Outsiders' and Rock/Contemporary Song for 'Lay 'Em Down.'

Though Diamond Rio have won five Country Music Association Awards, including four Vocal Group of the Year titles, last night marked their first win at the Dove Awards. Their debut Christian album, 'The Reason,' released last fall on Word Records, was named Country Album of the Year. Backstage Rio's Marty Roe, Dana Williams, Gene Johnson and Jimmy Olander shared how excited they were to be recognized for a project that meant so much to the band.

"It is a brand new deal and we were very surprised, not by being accepted," Marty told The Boot. "We've felt that for the last two years when we've been working and writing [in the Christian music community]. We've made so many new friends, but in any industry when you first walk in the door, there are other people who are very deserving and have been here a lot longer than us. So I wasn't expecting to win, but we are very humbled and surprised and excited about it."

Jimmy adds, "We've done a lot of different projects [where] we've been thinking about album sales and single releases-not that it's not art, but it's commerce as well. This is one that came from the heart. I think we're here doing the right thing at the right time and for someone to say 'Well done,' it's great!"

The Oak Ridge Boys began their career in gospel music before exploding on the country scene in the late '70s. Last night the Oaks won their ninth Dove Award as 'A Gospel Journey,' was named Long-Form Music Video of the Year. The video was directed by Doug Stuckey and produced by Bill Gaither, Barry Jennings and Bill Carter for Gaither Television Productions/Gaither Music Group.

Though the Oaks were on tour and couldn't be there to accept the honor, Duane Allen took time to check in with the Boot and share his thoughts on the Oaks winning this latest honor. "'Gospel Journey' was a tribute to the music that frames the foundation of the Oak Ridge Boys' music," Duane said. "A huge thank you to Bill Gaither and Spring Hill Music Group for their vision of this long-form video and re-tracing our roots.We are humbled and honored beyond words."

Jason Crabb has won previous Doves as a member of the Crabb Family, but took home his first Dove as a solo artist when he netted the Country Recorded Song of the Year for this hit 'Somebody Like Me,' penned by hit country writers Neil Thrasher and Michael Boggs.

Heath, who is working on his third album, due out in September, has been writing with country songwriter Lee Thomas Miller, who has written hits for Trace Adkins, Joe Nichols and Brad Paisley. "I love the craft that comes out of this town," Heath says of the songwriting community in Nashville.

ARTIST OF THE YEAR

NEW ARTIST OF THE YEAR

SONGWRITER OF THE YEAR

SONG OF THE YEAR (song title; writer; publisher - award goes to the writer and publisher)

MALE VOCALIST OF THE YEAR

FEMALE VOCALIST OF THE YEAR

GROUP OF THE YEAR

PRODUCER OF THE YEAR

Dove Awards in Recorded Song Categories are given to the Artist and Songwriter, if other than the artist.

WORSHIP SONG (award given to writer and publisher)

Dove Awards in Album Categories are given to the Artist and Producer, if other than the artist.

Dove Awards in Musical Categories are given to the creator