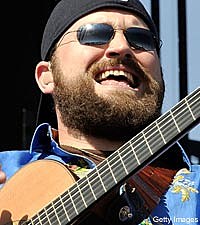 The Zac Brown Band were such a hit with military men and women in the Persian Gulf that the USO has invited them back for an encore performance to entertain the troops. This will mark the third USO tour for Zac, who joined the Chairman of the Joint Chiefs of Staff USO Holiday Tour in 2008. Zac and the entire band participated in the 2009 USO Fort Hoot Community Strong event. Details of the upcoming USO tour are confidential to protect the safety of the band.

But if you hunger to hear some live ZBB music stateside, there are plenty of places to catch a show. The band's latest tour begins April 24 in Live Oak, Fla. and concludes Sept. 2 when they headline the five-day Sailing Southern Ground Cruise on the Carnival ship, Inspiration.

The at-sea music festivals offer Zac and his bandmates a chance to mingle with fans and other musicians.

"We have been on cruise ships with 20 acts and then we were on one with Lyle Lovett and Brandi Carlile," Zac tells The Boot. "It's great to be trapped on a cruise with some of the best songwriters in the world. These are people we listen to and strive to be like. The collaboration is awesome."

For more details on the band's tour schedule and other news, check out their website.