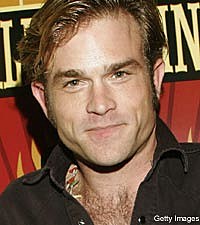 "I was out taking a walk and the song was weighing heavy on me," he says. "So I ducked into this bar called Numbers and wrote the song." Turns out the bar he wrote it in was where people went who wanted to be anything but alone. "I later found out that bar is a prostitute bar!" he says.

The singer-songwriter, who released his own critically-acclaimed, 'The Drifter,' has a Grammy win in his blood. His mother, singer Sammi Smith, earned a Grammy in 1972 for her rendition of Kris Kristofferson's 'Help Me Make It Through the Night.'

Waylon is becoming as well-known for his acting skills as he is for his music. Appearing as Jerry Lee Lewis in the Oscar-winning film 'Walk the Line,' opposite Joaquin Phoenix and Reese Witherspoon, he's also made several guest appearances on the TV series, 'CSI.' In addition to finishing his second CD, 'The Bruton Experience,' Waylon can be seen in the upcoming independent films, 'Kingshighway' and 'Road to Nowhere.'