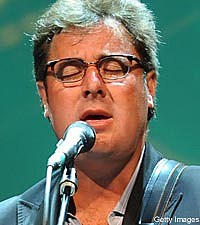 Vince Gill and Emmylou Harris will perform a duet together on Wednesday's 'Jay Leno Show,' as part of their trip out west to help a hallowed Nashville institution. Vince and Emmylou are part of an all-star lineup at the west coast All For the Hall benefit show, in collaboration with a similar show in Music City, both of which benefit the Country Music Hall of Fame and Museum.

Funds raised at both shows will go to help preserve and expand the Country Music Hall of Fame and Museum, which is gearing up for a $40 million expansion that will literally double the size of the building.