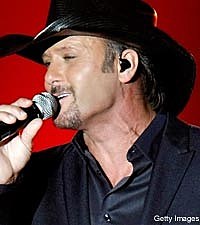 Tim McGraw may be 43, happily married to Faith Hill, and the proud father of three daughters but young women in the sold-out audience at his Southern Voice tour stop on July 10 in Bristow, Va., reacted to his presence as if a modern-day Elvis Presley combined with Paul McCartney and a dash of Justin Timberlake had arrived on the scene.

"Are you ready for Tim McGraw? Really ready?," asked Tiffany, a 20-year old audience member clad in short shorts and a 'Southern Voice' tour shirt as another audience member took her seat. "I am ready. There is no question about that!"

Added her friend Mary, also 20, "I have been a fan of his forever," just as a film-strip graphic reading "Tim McGraw Presents Southern Voice Tour" appeared on a screen.

That's when Tiffany, Mary and hundreds of teens and early 20-somethings -- many apparently accompanied by their equally enthusiastic moms -- stood on chairs and desperately screamed, shouted and sobbed even before Tim's silhouette was visible and the first chords of 'Real Good Man' twanged through the air.

"I peed myself!' screamed Tiffany with joy as Tim, clad in jeans, boots, his signature black hat, and a sleeveless white t-shirt that grew increasingly wet in the humid Washington, D.C.-area weather, appeared.

For his part Tim -- whom 'People' just dubbed 'Country's Hottest Guy'-- reacted to the crowd as if they were amusing old friends, continually reaching down into the audience to touch the sea of upraised hands and strolling on a special runway from the main stage into their midst where he serenaded them, touching more hands without ever losing a beat or missing a note.

"If this is you first time at one of our concerts you'll learn real fast we don't [talk a lot], we play music," he told the crowd before going through a medley of his hits including 'Where the Green Grass Grows,' 'I Like It, I Love It' and 'Let it Go."

Several songs into the show Tim brought his soon-to-be 12-year-old daughter Maggie on stage to sing the chorus of 'Last Dollar (Fly Away).' As she softly sang, smiling shyly at the clamoring audience, Tim stood with his arms around her, his head bent so only the top of his black Stetson was visible to the crowd.

Despite the fatherly gesture, the women in the audience continued to scream and shout endearments to Tim who watched as one of his entourage led Maggie to the back of the stage where other youngsters -- two of whom appeared to be her sisters - danced and sang.

True to his word, Tim didn't spend a lot of time talking except to ask for prayers for Louisiana and Mississippi (his and Faith's respective home states), telling how he pawned his high-school class ring to buy a guitar (so he could learn to play and impress women) and introducing friends Brad Warren and Brett Warren, known as the Warren Brothers, who joined Tim and his band in a moving rendition of 'If You're Reading This.'

Maggie wasn't the only youngster to make an appearance on stage. A young girl -- identified as 9-year old Megan by a woman who wrote to the Washington Post and identified herself as Megan's mother -- was brought on stage to dance with Tim during a cover of 'Tiny Dancer.'

"One of the concertgoers told Megan to look stage left and there was Faith Hill," wrote the woman. "[Faith] was giving Megan a thumbs up and waving her hands up and down to her. Megan was in total shock."

Although Megan's star turn brought an array of "awwws" from the audience, the shouts and screams for Tim returned to full volume as Megan returned to the audience and Tim proceeded to sing 'Something Like That,' 'Live Like You Were Dying," and 'Southern Voice.'

"How does this music make you feel, ladies and gentlemen?," Tim asked the crowd. "I gotta feel you."

If sound waves could translate into hugs, Tim would have been crushed by the response.

Tim's next concert on the Southern Voice tour is July 15 in Holmdel, N.J. For a complete list of concert dates and locales, click here.