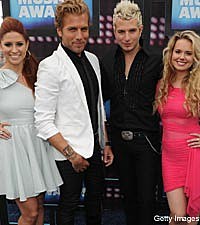 "We are so blown away and excited by this nomination for a Teen Choice Award," says Gloriana's Cheyenne Kimball. "It's amazing to be recognized for doing what we love and adore, especially by all the teens who have shown us so much support and continue to show us support. This is just such an honor. Thank you!"

Taylor Swift was the 2009 Teen Choice winner in the all-genre Choice Female Artist category. She's up for the same award again this year, along with Choice Female Country Artist. This is the first time the country genre has had its own breakout categories at the show. (See the full list of Teen Choice country music nominees below.)

The Teen Choice Awards honors the year's biggest achievements in music, movies, sports, television and fashion, as voted on by teens ages 13 through 19. The winners are awarded with authentic surfboards.

This year's ceremony, hosted by Katy Perry, will take place in Los Angeles on August 8. The show will air the following day on FOX at 8:00 PM ET.

Filed Under: Gloriana
Categories: Country News
Comments
Leave A Comment
Back To Top