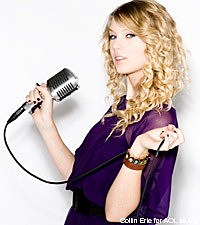 By any measure, it's good to be Taylor Swift. The 19-year-old has gone from wannabe singer to country superstar in less than three years. Her meteoric rise is accompanied by the kind of critical huzzahs from such august outlets as the New Yorker and the New York Times that many older artists would give their right arm for.

Her second full-length album, 'Fearless,' entered the charts at No. 1 and has bounced back up to the top toward year's end. During our exclusive interview after her AOL Music Sessions taping, despite being tightly booked for back-to-back interviews, Swift is relaxed, convivial and focused as she answers questions about her life in and out of the studio.

Why did you call the album 'Fearless'?

I really wanted to make sure it was the right choice, so I took that word "fearless" and I applied [it] to each one of the things that my songs deal with: getting your heart broken, having to face the fact that you're not going to be with the person you thought you were going to be with, someone apologizing to you over and over again for something they're never going to stop doing, having faith that maybe someday things will change -- all of those things I thought had a fearless element to them. Also, I think that the word "fearless" doesn't necessarily mean that you don't have any fears. I think that sometimes being fearless is having fears but jumping anyway.

Part of the charm of 'Love Story' is the "just say yes" refrain. When was the last time that you just said yes to trying something new?

I bought red lipstick the other day. I'm the kind of person who's really modest with lipstick or any kind of color at all, and I think people are going to throw something at me if I wore red lipstick! But my best friend and I were in the makeup store, and I just looked down and saw the red lipstick and said, 'I need a change. I'm doing it!' I bought it and wore it out of the store, and I felt like I was making this daring change. 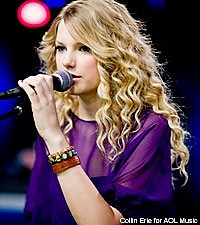 'White Horse' is the current single mainly based on its huge sales on iTunes. Why you think people are responding to that song so strongly?

On this album, I deal with a lot of fairy tale themes. Sometimes they turn out good, sometimes they turn out bad. 'Love Story' was a really happy ending -- you put everything you have into love and it works out. Then in the song 'White Horse,' you put everything you have into love and you get your heart broken. It blew my mind that such a personal song was the one people were talking the most about, because I always felt like the more personal my songs were, the more I could just relate to them. But, really, more people have been able to relate to those songs -- the ones that I wrote when I was really going through something terrible.

When you were growing up, what was your favorite fairy tale?

The one I loved the music to the most was 'The Lion King.' There are about 4,000 videos of me as a little kid singing 'Lion King' songs. Like, running up to random strangers on the beach and just breaking out in song!

Do you want to do Broadway?

I think Broadway is something that I might want to do when I'm older. I started out in children's theater, and I have just this complete appreciation for drama. In my headlining tour this year, it's my goal is to make it dramatic and to make a theatrical element to it, rather than just song after song after song.

The song 'Change' is a bit of a departure for you in that it takes a strong stance to challenge the status quo. What inspired that? 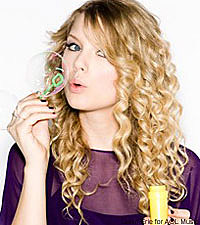 I wrote the song 'Change' as an underdog story. It's kind of crazy to think that the Olympics chose this as one of the songs to play during the Olympic Games. That blew my mind, because what I actually wrote this song about was being on a small record label. When you're at a record label that had 12 employees, you have to work harder to get on major tours. You have to work harder to get presenter slots or performer slots on award shows. There was this moment where I sat there and was like, 'When are we going to get a fighting chance? We're the smallest record label in Nashville, but we want this really bad.' I wrote the beginning to this song, and I thought someday things are going to be different. I finished the song the night that I won the Horizon Award at the CMA Awards and looked over and saw the president of my tiny, little record label crying.

You talk about how this album has a lot of love songs on it. To me, the most beautiful love song is 'The Best Day.' Talk about the day you played that for your mom.

I started writing it in the summertime last year, and I decided I wasn't going to play it for my mom until Christmas. So I finished the song secretly [and] recorded it completely without her knowing. I synched it up with all these home videos of me when I was little with her, and I made this music video for it. On Christmas Eve, I put it in the DVD player and played it for her. She didn't know that it was me singing until about halfway through the song, at which point she burst out crying. It's probably one of my favorite songs that I've ever written. My mom and I have been best friends since I was born. So I'm really glad that I got that down on CD.

You never went through a rebellious stage with your mom like a lot of teenage girls do?

My mom has never been condescending. She's not the kind of person that needs to be perfect all the time and needs me to see no flaws in her. The coolest thing about my mom is she's always been so real with me, and honest no matter what. When I was little, she would indulge my imagination and tell me stories. I attribute my fascination with writing and storytelling to that. And even when I was preteen, that's when I needed her the most. That's usually when people are [at the] too-cool-for-their-parents stage. Well, I was really not cool enough for anyone but my parents in that phase. I had no friends! My mom was the one person that I could turn to and who never, ever, hurt me.

What's the strangest thing that a fan has ever given you?

This guy gave me a big turtle shell with my face painted on it -- that was definitely a first! Then it's always awesome when someone walks up and they're like, 'I got a gift for you -- got that done last week,' and it's my name tattooed on his arm. It's such an honor to be tattooed on someone's body, because that's permanent! I 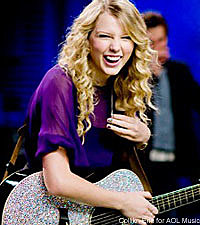 just want to walk up to him and be like, 'I really hope that this whole career thing works out for me so that two years from now you're not really embarrassed of that.'

Who would we be surprised to know is on your iPod?

What do you do when one of your songs comes on the radio?

I'll listen to it, but I want to check the other radio stations to make sure that one of the songs I really love isn't on. If there's a song that I'm a big fan of, I'll change it to that. But if nothing else is on, I'll turn it up and be like, 'Yes!' I still have that moment. That never gets old when your song is on the radio.

You've recently said that any guy you date now is starting to realize that they're probably going to end up in a song. What else should any guy you date know before going into the relationship?

I'm not typically the girl that dates a lot of guys or is in relationships a lot. Most of my life I've been single. If I meet somebody who's great, I'll make an exception, but I'm really happy being alone. I'm happy being single. I don't feel a sense of emptiness if I don't have a boyfriend. I think that that's an important thing to carry into a relationship, because if you need the other person -- if you're like, 'I need to talk to you! Why didn't you call me back?' -- if you're that girl, then nobody's going to want to date you. So I think that it's important that whoever I date be an independent person, because I'm a really independent person. I have this rule: I don't call a guy first. You can't ever send two text messages in a row. If they don't answer your text messages, then that's fine. Don't stress it out and send another text message. I think that it's important to be confident in who you are, because the best thing you can bring to a relationship is a whole person.