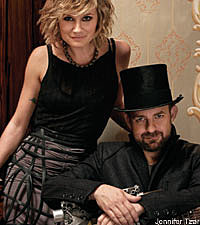 The highly-anticipated fourth album from multi-award-winning duo Sugarland (Kristian Bush and Jennifer Nettles) now has a name and an official release date! 'The Incredible Machine,' which is also the name of the duo's current tour, hits stores on October 19.

The duo have co-writing credit on the entire album, and they co-produced the disc with veteran Byron Gallimore. On July 26, the CD's first single, 'Stuck Like Glue,' will hit radio.

"'Stuck Like Glue' is just plain, unashamed, Sugar-fun!" says Jennifer. "It sticks in your brain, no pun intended. To me it feels young, hip and, of course, sassy! I can't wait for it to get out there so we can play it live in our show. We've been sitting on our hands to not play it live 'til it was released!"

The duo also has a special treat on their official YouTube channel. 'The Week in Review' is a weekly video giving fans a behind the scenes look at Sugarland off stage and on the road. Each Wednesday a new clip will be posted to the channel.

Sugarland have sold more than eight million records and notched six No. 1 singles since their 2004 debut. They're up for Best Country Group honors at next month's Teen Choice Awards.