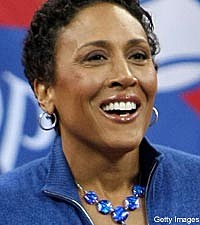 Robin has also interviewed some of the biggest names in country on 'GMA,' including Kenny Chesney, Tim McGraw, Faith Hill, Keith Urban and Dolly Parton. So which country crooner would she want to be stranded on a desert island with?

"Anybody in Rascal Flatts would be fine with me!" Robin declares. "They're my boys. They are fun, good people! They're sports fans, as I am. I'll take any of those three ... I'd be living happily ever after."

Since the vibrant TV personality is single, we had to also ask her if she's ever had a crush on a country singer. "Oh, my gosh, I wouldn't have the nerve to say," Robin laughed. "They're so cute. I'll just tell you though ... Keith Urban, when he brought his mama the first time he came here ... I love anybody who loves his mama as much as he does. He is delicious. I love that straggly look to him that is just so appealing.

"I have to say also, Tim McGraw," Robin continued. "I was so embarrassed ... He was on our concert series (in 2005), and he was the biggest draw for our concert series that year in the park. He's just all man. When he came walking up, I said, 'I'm not supposed to do this, but you are the most incredible human being I think I've ever laid my eyes on!' And he was like, 'Thank you, darlin'.' And I was like, 'I can't believe I just told him that!' [laughs] He and Faith (Hill) are so beautiful, so in love and so comfortable with each other. I told her when she was here, 'You know what I love about your husband -- because we know he's so into you, we know he's a family man, he loves the girls -- he's a little bit of a bad boy. He likes to hang out with his boys, have a good time.' And she goes, 'Yes, that's Tim!'" [laughs] It's nice when you know where his heart is."

Robin will be joined at Friday's special Opry show by Carrie Underwood, who will do the honors of flipping the switch to turn the Opry's red barn backdrop pink. Carrie will also perform on the special show, along with Jo Dee Messina, Lorrie Morgan, Mindy Smith and Terri Clark, who also has a close tie to the cause, as her mother is currently battling cancer.

A portion of the proceeds from tickets to Friday's show will be donated to Women Rock for the Cure and the Greater Nashville affiliate of Susan G. Komen for the Cure.

Categories: Concert News
Comments
Leave A Comment
Back To Top